A downloadable asset pack for Android

Detecting android hard keys events like the volume up/down,  power button and Android TV remotes,  was never so easy before!

This project is in alpha state and is not considered stable or ready for production, but you are welcome to download it for free and use it in any way you wish.

This extension is not suitable to those that intent to implement gamepad functionality with GMS2.

How to use it

The API is minimal and very similar to the GMS2 functions, offering usage familiarity.

With the function android_key_pressed(keycode)  you can check to see if a key has been pressed or not.

With the function android_key_check(keycode)  you can check to see if a key is held down or not.

With the function android_key_released(keycode)  you can check to see if a key has been released or not.

The default GMS2 keycodes like vk_up, vk_space etc are not compatible with the extension. The extension uses the native keycodes and they have been set as macros in the supplementary extension AndroidEventKeycodes. You can macro yourself the ones that you need and do not include the supplementary extension to avoid over flowing the code autocompletion. You can see the complete keycodes list [here]. Please note that the equivalent to vk_any  is the real -1 and has been set as KEYCODE_ANY macro.

What is happening behind the scenes

The o_android_core_events object creates the  ds map events_map on create event or room start event if persistent.  The events_map is a copy of the async_load which receives the events from the java native code. The events_map can be accessed from other objects, by using the macro core_events_map.

The ON_KEY_DOWN_LENGHT will return the number of keys that are currently down. Use this number with a loop to access all the events data:

(A complete list of the keycodes can be found here)

I intent in the future to add keys that specifying the device id of the key event and more other useful data for complete integration of multiple input sources. I consider this project as active, developing wise, but know that I can only work on it in the free time between my main projects, so expect a relatively slow progress. The project is free with MIT license, so if you find it useful, consider a small tip to support me.

EDIT: I accidentally forgot to include the core object into the extension packages. I uploaded the fixed packages. I am sorry for the inconvenience...

The downloadable files are:

The code is not yet documented. Expect fully documented code at a later more stable release.

Please note that I have not put specific platform conditionals in the example project yet, so any attempt to compile at any non android platform will fail! 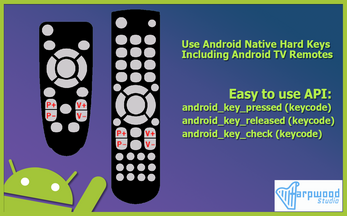